The Sustainable Design Collective ‘On Tour’ 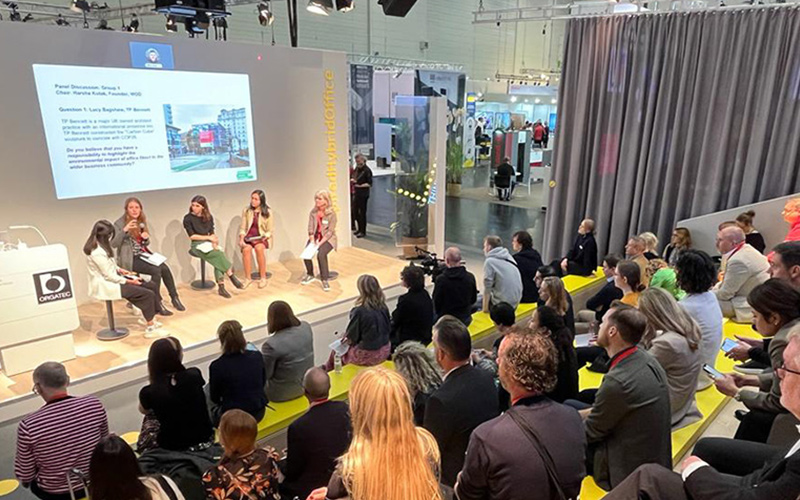 How exciting! Members of the Sustainable Design Collective had been invited to present at Orgatec. We would be extolling our message to participants and visitors at Europe’s largest workplace exhibition as well as being joined by a massive online audience.

Before travelling to Orgatec in Cologne, we would be visiting Sedus Stoll’s headquarters in southern Germany. As a major supporter of SDC, we were delighted to accept the invitation to experience the company’s approach to sustainability. The trip would also provide the perfect opportunity to spend time in each other’s company as well as discuss and debate key issues.

Formed in January 2022, SDC had already held five two-hour meetings and hosted seminars at Clerkenwell Open in September. Driven by the key pillars of ‘collaboration and knowledge sharing’, this was to be a great opportunity.

One SDC member would be flying down from Glasgow to join our flight from London Heathrow. Despite the higher fare and nine-hour journey time, Dom Pegram committed to the reduced carbon emissions of international train travel.

None of us could have predicted what was to follow. We were to experience the impact of climate change first hand!

First problem – the plane from Glasgow was delayed so Jennifer and Julie, from Sedus Stoll, would miss the flight. Frantic rebooking and they would be following on. Meanwhile, Dom was feeling slightly less smug as he got stuck in Paris waiting for the connecting train.

We got through the queues at ‘security’ and boarded the plane with great excitement. Looking out of the windows, we could see the rain lashing down outside together with dramatic forks of lighting. All flights were grounded! Not to worry, we took turns to visit the cockpit and enjoyed the banter.

The waiting continued interspersed with shared sweets and crisps! We were now below the threshold for fuel so would have to return to the stand! Gridlock at the airport meant, however, we couldn’t! Yet more waiting until finally we refuelled but no, it was not to be! We would be too late for Zurich’s ‘curfew’ on flights. The flight was, after over five hours, cancelled.

Next issue. Roads and rail into London were severely disrupted so we couldn’t return home! Could we get 12 hotel rooms when everyone else wanted them too? We agreed to share rooms and there was availability at the Hilton at Terminal 5!

There was much dismay when Dom posted that he had arrived and Jennifer and Julie, booked on the later flight, had also landed in Zurich!

After carnage in baggage reclaim and nearly two hours of waiting, we went to the taxi rank for another long queue. We finally arrived at the hotel at 2am. WOD’s sustainability manager, Joanna, had made a sneaky stop to buy a bottle of wine. Her reaction was hilarious when she realised that it wasn’t a screw top …. and there was no cork screw!

Next disaster – the Scottish contingent had arrived at the rural hotel, but it was all locked up with no response from the night porter. What were they to do? Sedus Stoll’s organiser, Eli, came to the rescue! She managed to contact a friend who owned a hotel and they managed to stay there.

We collapsed into bed – we will worry about the rest of the trip tomorrow!

Sunshine after the storm and a new day. The fundamental issue was all flights were fully booked!  Sedus Stoll’s UK managing director, Ben Wheeler, worked some magic. Plan B: we would continue our stay at the Heathrow hotel and join the team in Germany via Teams link. Early on Tuesday morning, we would fly to Dusseldorf to arrive in time for our Orgatec presentation!

Not ideal but we were able to have lots of debates and discussions. Issues included the need for evaluation of Scope 1, 2 and 3 (with Scope 3 usually being the highest impact); re-warranty of products; design for disassembly and availability of spare components for repairs.

Sedus Stoll’s HR manager, via Teams, described the Company’s commitment to social responsibility through its two charitable foundations. One being focused on scientific research together with education and protection of the environment. The other is primarily supporting educational projects in Germany and around the world.

In Germany, Workers’ Councils are commonly a part of the corporate structure. Headed by an elected chair and part of the main Board, the Council is responsible for employee protection, representation, and negotiation. Similarly, employee participation and welfare are fundamental at Sedus Stoll.  Profit share, rewards for innovation, employee loans, low cost restaurants using produce from the company’s farm are some of the benefits. Health programmes include the opportunity for holidays or retreats at a mountain chalet as well as daily availability of an organic broth, using the antioxidant recipe ‘created’ by the one of the original founders, Emma Stoll.

With great reluctance, Nigel Tresise (Align) and Tash Hewlett (Peldon Rose) could not continue with the tour. They both had important presentations and couldn’t risk similar chaos on the return journey.

We departed to Dusseldorf followed by the train trip to Koln Messe. Some of the group hadn’t previously visited this vast emporium of ‘all things workplace’!

Normally biannual, the exhibition was the first since the cancellation due to Covid-19. It was already heaving with visitors, and we made our way to the ‘Inspired Hybrid Office’ stage.

The size of the stage meant we had to split into three groups. First up was WOD’s founder, Harsha Kotak, offering an overview of WOD and the Sustainable Design Collective. She then acted as moderator for the panel discussion between Lucy Bagshaw of TP Bennett, Woodall’s Ana Rita Martins, and May Fawzy of MF Studio and forthcoming President of the British Institute of Interior Design.

Lucy opened proceedings by describing the responsibilities of the design community to highlight the environmental impact of office fitout. A photo of TP Bennett’s public installation during COP26, the “Carbon Cube”, provided an example of the practice’s commitment. Ana Rita spoke about the use of building standards, such as BREEAM and LEED, as a roadmap for greater environmental responsibility. She was followed by May who talked about the increasing involvement and client commitments to ESG.

Joanna Knight moderated the next two sessions. BDP’s Emily King outlined the recognition of the commercial restrictions of EPDs and other independent certifications. She offered an assurance to include all suppliers but emphasised an imperative need for openness and transparency to enable designers to assess different products and materials. Ella Fathi, from Oktra, described how she had recently ‘transitioned’ from design director to become the company’s Project Sustainability Manager. She has already introduced new initiatives to ensure baseline standards for all projects.

JLL’s Laura Wardrope provided an alternative perspective. As a project manager for this international property company, she described how improved environmental performance is starting to have financial benefits for property owners with the reverse for buildings with lower standards.

The final panel discussion was held between three leading furniture suppliers – Bureau Group, JPA Workspaces and Salt & Pegram. As operations director for Bureau Group, Jennifer Russell highlighted how the service sector can overcome some of the logistical issues of reuse. Fiona Edwards described how her company tends to work on a more regional basis enabling JPA Workspaces to provide a complete ‘full life’ service including repair days, remanufacturing and reuse. Dom Pegram gave an impassioned speech about the importance of maximising lifecycle management and overall greater environmental responsibility within the workplace sector.

Joanna ended proceedings by summarising the discussions and a ‘call to action’ for companies to work collaboratively and share knowledge for the ‘greater good’.

We were delighted that many people stayed to talk to us about the presentations and discover how they can get involved. We could now relax, have fun, and enjoy Jennifer’s birthday party in the evening!

The final day was spent investigating Orgatec before the journey home. Fortunately, our return route was less of an ordeal!

We are extremely grateful to Ben Wheeler and the whole Sedus Stoll team for sponsoring and arranging the trip.